It was reported that welding work was being done in the area and appeared to have possibly caused the initial blast.

Mountain Home reverberated physically, as reports of an explosion began immediately coming into the 911 dispatch on Tuesday May 18th just before 5 pm. Individuals throughout our area were feeling the impact of a massive explosion at the Simplot Granary located in Elmore County you can see in the distance over the train tracks from Sunset Blvd. Some last night did not know that there had been an explosion and even said it felt like maybe it was an earthquake.

In speaking this morning with Mountain Home Fire Department Chief Mark Moore, he stated the calls came in, they were dispatched, the departments pagers were quickly activated and they arrived on scene along with Idaho State Police, City of Mountain Home Officers, County Deputies and EMS. Chief Moore stated “it was like arriving at a war zone”. Emergency Services needed to set up a staging area at the intersection of Bypass and Granary Roads in order to secure the site. Roadblocks were in place at the staging area as well. Contact was made with Plant Manager Matt Draper for a briefing on what was contained in the silos and on- site,to ensure the safety of all responding services.

The initial explosion, in the granary transfer station was massive and was followed by multiple smaller explosions as small fires and smoldering grain made contact with the grain dust which was described as highly explosive. It was reported that welding work was being done in the area and appeared to have possibly caused the initial blast. It was then that the smoldering grain, being transferred throughout the silos themselves thru grain elevators, became the distribution mechanism of the small fires identified in the tops of the silos. Chief Moore described the top of the silos as “being like a bag of popcorn opening up at the top.” There are a total of 5 silos with damage at the top of each of them. 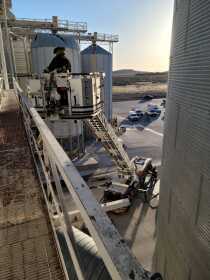 Chief Moore said this incident was assisted by multiple agencies that we have available in our city and county and he continued with “the Simplot people on the ground were phenomenal. They did an excellent job of locating their own people on shift, shutting off equipment and providing the information we needed and with their knowledge and precise guidance enabled emergency services to proceed with confidence. In an additional briefing on site this morning, it was reported to me that the individual injured in the accident, as of yet not identified, was transferred to the Eastern Idaho Regional Medical Centers Burn Center in Idaho Falls and is reported in critical condition.”

“Responding firefighters were able to reach the top of the silos with the benefits of the departments’ recently acquired Tower One ladder truck and proved its use as a valuable asset. They worked with minimized water flow for property and content conservation throughout the evening. All boilers, electricity and gas utilities had previously been shut down with the assistance of the quick response of the utility companies and the expanded multi agency collaboration. Once the FD had the smoldering grain under control Simplot was then able to begin the salvage of their grain feed.”

Sorry, the comment form is closed at this time.